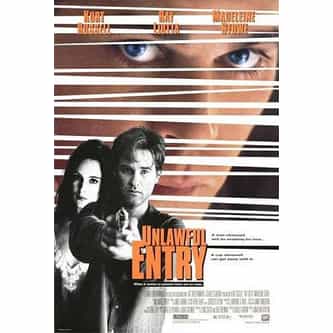 Unlawful Entry is a 1992 American thriller film directed by Jonathan Kaplan starring Kurt Russell, Ray Liotta and Madeleine Stowe. The film involves a couple who befriend a lonely policeman, only for him to develop an unrequited fixation on the wife, leading to chilling consequences. Ray Liotta was nominated for an MTV Movie Award in 1993 for his portrayal of the psychopathic cop. The film was remade in Bollywood as Fareb, starring Faraaz Khan, Suman Ranganathan, Ashok Lath, Vishwajeet ... more on Wikipedia

Unlawful Entry IS LISTED ON