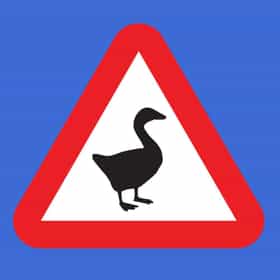 Untitled Goose Game is a stealth game developed by House House. In the game, players control a goose and are tasked with a series of challenges to bother human characters. Published by Panic, the game will be released on September 20, 2019 for Microsoft Windows, macOS, and Nintendo Switch. Untitled Goose Game is a stealth game in which players take control of a goose. The goose can walk, honk, flap its wings, and reach out for items. It can interact with objects and people. The game is set in a village and the goal is to complete a number of tasks as the goose. These tasks often involve interacting with non-playable characters (NPCs) who react to the goose's behaviour. The game is ... more on Wikipedia

The 20 Best Untitled Goose Game Memes We Could Find 384 votes "It's a lovely morning in the village and you are a horrible goose," is the simple ad copy which tells you all you...

Untitled Goose Game is ranked on...