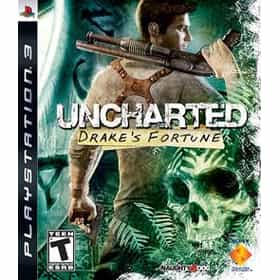 Uncharted: Drake's Fortune is a 2007 action-adventure third-person shooter platform video game developed by Naughty Dog, and published by Sony Computer Entertainment for PlayStation 3. It is the first game in the Uncharted series. Combining action-adventure and platforming elements with a third-person perspective, the game charts the journey of protagonist Nathan Drake, supposed descendant of the explorer Sir Francis Drake, as he seeks the lost treasure of El Dorado, with the help of journalist Elena Fisher and mentor Victor Sullivan. Originally announced at E3 2006, the title was developed for about two years before being released at the end of 2007. Seen as a key title for the ... more on Wikipedia

Uncharted: Drake's Fortune is ranked on...