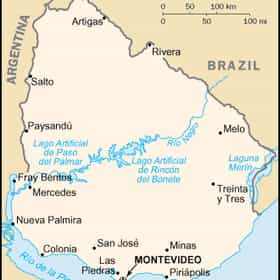 Uruguay, officially the República Oriental del Uruguay, is a country in the southeastern region of South America. It is bordered by Argentina to its west and Brazil to its north and east, with the Atlantic Ocean to the south and southeast. Uruguay is home to 3.3 million people, of whom 1.8 million live in the metropolitan area of its capital and largest city, Montevideo. With an area of approximately 176,000 square kilometres, Uruguay is geographically the second-smallest nation in South America after Suriname. Uruguay remained largely uninhabited until the establishment of Colonia del Sacramento, one of the oldest European settlements in the country, by the Portuguese in 1680. ... more on Wikipedia

Uruguay is ranked on...

Uruguay is also found on...