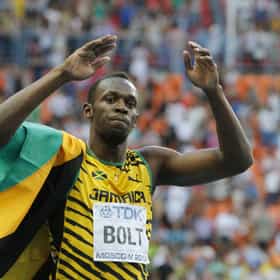 Usain St Leo Bolt (; born 21 August 1986) is a retired Jamaican sprinter. He is a world record holder in the 100 metres, 200 metres and 4 × 100 metres relay. Owing to his achievements and dominance in sprint competition, he is widely considered to be the greatest sprinter of all time.An eight-time Olympic gold medallist, Bolt won the 100 m, 200 m and 4 × 100 m relay at three consecutive Olympic Games, although he lost the 2008 relay gold medal in 2017 due to a teammate's doping disqualification. He gained worldwide fame for his double sprint victory in world record times at the 2008 Beijing Olympics, which made him the first person to hold both records since fully automatic ... more on Wikipedia

Usain Bolt is ranked on...

#4 of 2,195 The Best Athletes Of All Time 34.1M VOTES The greatest athletes of all time: a list of the most dominant, iconic, famous players in the history of spor...
#46 of 92 Celebrities Whose Lives You Want 42.5k VOTES Celebrities, in a general sense, live a life of luxury. Nice houses, fancy cars, personal jets, drinking from the top shelf;...
#7 of 55 Famous Athletes Who Could Have Dominated a Second Sport 14.8k VOTES Famous athletes who could have dominated a second sport tell the story of men and women with so much athletic ability that t...
#2 of 47 Overhyped Athletes Who Still Performed 50.8k VOTES Overhyped athletes who still performed represent a special breed of athletes who captured the attention of fans and critics ...
#3 of 97 The Best Athletes of 2012 4k VOTES The best athletes of 2012 won Olympic gold medals, helped clinch team championships, broke world records and became some of ...
#14 of 55 The Most Influential People of 2012 7.2k VOTES The most influential people of 2012 include world leaders, CEOs, athletes, actors, musicians and many others who made an imp...
#4 of 96 The Best Athletes of 2011 4.8k VOTES Whether they led your favorite team to a championship or helped a rival team eliminate yours from the playoffs, the best ath...
#7 of 41 The Most Impressive Athletes at the Rio Olympics 1.3k VOTES The 2016 Olympic Games in Rio have seen many broken records as athletes finally showcasing their talents after years of disc...
#18 of 81 The Best Athletes of 2013 6.4k VOTES The best athletes of 2013 are the league leaders, most valuable player award winners and widely regarded as the top players ...
#16 of 72 Athletes Who Should Get a Reality Show 25.4k VOTES Athletes who should get a reality show are the popular athletes in the NFL, NHL, NBA, MLB and other sports whose off-field l...
#123 of 152 The Most Influential Athletes Of All Time 29.7k VOTES The most influential athletes of all time aren't just the best stars from their respective sports, but some of the most icon...
Crazy Diets of Wrestlers and Other Athletes 37k VIEWS One of the top questions when it comes to Dwayne Johnson is "What does the Rock eat in order to stay that jacked?"...
#2 of 70 Who Is The Most Famous Athlete In The World Right Now? 26.3k VOTES When it comes to the most famous athletes in the world right now, a select few names easily top the list. Not only that...
#16 of 71 The Most Influential Athletes Right Now 12.3k VOTES Whether they're top stars of their sport or they're changing the way the game's played, these are the most influential curre...
The 50 Highest-Paid Athletes 73.8k VIEWS   List of the highest paid athletes in the world, professional athletes who make the most money annually. This is For...
33 Famous People with Scoliosis 1M VIEWS List of celebrities with scoliosis, loosely ranked by fame and popularity. Scoliosis is a condition in which an individual's...
The Highest Paid Celebrities of 2013 20.1k VIEWS The highest paid celebrities of 2013 range from the top stars in music, movies, television, news and sports, but all have on...
10 Pro Athletes Who Are Also Accomplished Artists 13.6k VIEWS This list contains information about professional athletes who are also accomplished fine artists, loosely ranked by fame an...
Celebrity Heat Fans 6.8k VIEWS With rosters that have included Dwyane Wade, LeBron James, Shaquille O'Neal, Alonzo Mourning, and Chris Bosh, the Miami Heat...

Usain Bolt is also found on...