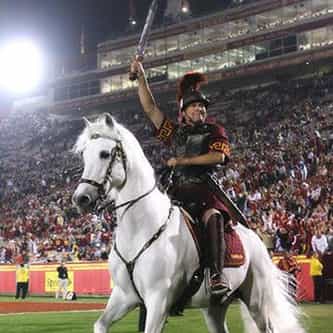 The USC Trojans are the athletic teams that represent the University of Southern California (USC), located in Los Angeles, California. While the men's teams are nicknamed the Trojans, the women's athletic teams are referred to as either the Trojans or Women of Troy (the university officially approves both terms). The program participates in the Pac-12 Conference and has won 130 team national championships, 107 of which are National Collegiate Athletic Association (NCAA) national ... more on Wikipedia

794 votes The Best USC Trojans Wide Receivers Of All Time

USC Trojans IS LISTED ON