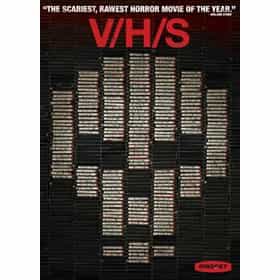 V/H/S is a 2012 American anthology horror film. It features a series of found-footage shorts written and directed by Adam Wingard, David Bruckner, Ti West, Glenn McQuaid, Joe Swanberg, and the directing quartet known as Radio Silence. The film debuted at the 2012 Sundance Film Festival in January 2012, and released on demand on August 31, 2012. The film made its limited theatrical premiere in the United States on October 5, 2012 and in the UK on January 18, 2013. A sequel was later released in 2013, as well as a third film, V/H/S: Viral, released on October 23, 2014 on VOD and in select theatres on November 21 of the same year. ... more on Wikipedia

#2 of 110 The Most Horrifying Found-Footage Movies 64.4k VOTES In the mood for a frightful night? Browse through this list of the scariest found footage films, for movies with the most te...
#5 of 13 The Best Computer Screen Films 167 VOTES Cyber horror movies is a genre on the rise due to the integration of technology into our everyday lives. Movies like Unfrien...
#7 of 15 15 Pretty Good Monster Movies And Creature Features On Netflix Right Now 923 VOTES Monster movies are often dismissed as cornball nonsense for children, but, as anyone who's scratched the surface knows, the ...
#201 of 505 The Scariest Movies Ever Made 549.3k VOTES These are the all-time scariest movies ever made. Many of these movies have become part of the pop culture lexicon due to th...
15 Terrifying Anthology Horror Movies Perfect for a Halloween Binge 9.1k VIEWS A common problem with horror films is that many have too much filler. You end up with an hour of buildup for a film that rea...
#5 of 39 The Best Horror Movies of 2012 4.4k VOTES The best horror movies of 2012 managed to scare the daylights out of movie goers and keep them enthralled with tales of terr...
#20 of 41 The Best Indie Horror Movies, Ranked 2k VOTES This list contains information on the best indie horror movies, ranked from best to worst by user votes. The best indie horr...
#13 of 30 The Best Supernatural Thriller Movies On Shudder 119 VOTES If you’re into films about ghosts, demons, or other odd phenomena; then you must be a fan of paranormal cinema. This list of...