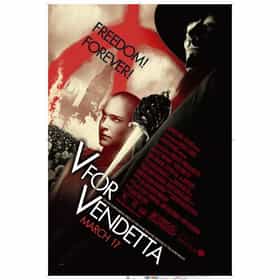 V for Vendetta is a 2006 American political thriller film directed by James McTeigue and written by the Wachowski Brothers, based on the 1988 Vertigo graphic novel of the same name by Alan Moore and David Lloyd. Hugo Weaving portrays V, an anarchist freedom fighter who attempts to ignite a revolution against the brutal fascist regime that has subjugated the dystopian United Kingdom and exterminated its opponents in concentration camps. Natalie Portman plays Evey, a working class girl caught up in V's mission, and Stephen Rea portrays the detective leading a desperate quest to stop V. The film was originally scheduled for release by Warner Bros. on Friday, November 4, 2005, but was ... more on Wikipedia

lists about V for Vendetta

The Most Eloquent Quotes From 'V for Vendetta' 69 votes The best quotes from V for Vendetta make you realize how great the movie really is, even if you haven't seen it in a while. ...
V For Vendetta With Jeff Goldblum's Voice Is The Greatest Thing You'll Ever Hear 619 views "You're the most ravishing creature that I've ever seen in my life... I just became a knight in Portugal."

V for Vendetta is ranked on...

V for Vendetta is also found on...