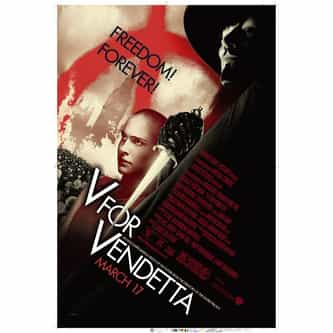 V for Vendetta is a 2006 American political thriller film directed by James McTeigue and written by the Wachowski Brothers, based on the 1988 Vertigo graphic novel of the same name by Alan Moore and David Lloyd. Hugo Weaving portrays V, an anarchist freedom fighter who attempts to ignite a revolution against the brutal fascist regime that has subjugated the dystopian United Kingdom and exterminated its opponents in concentration camps. Natalie Portman plays Evey, a working class girl ... more on Wikipedia

lists about V for Vendetta

112 votes The Most Eloquent Quotes From 'V for Vendetta'

V for Vendetta IS LISTED ON