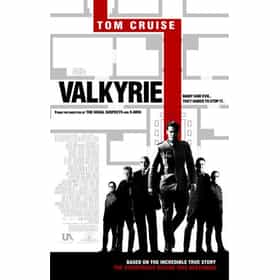 Valkyrie is a 2008 American-German historical thriller film set in Nazi Germany during WWII. The film depicts the 20 July plot in 1944 by German army officers to take down Adolf Hitler and to use the Operation Valkyrie national emergency plan to take control of the country. Valkyrie was directed by Bryan Singer for the American studio United Artists, and the film stars Tom Cruise as Colonel Claus von Stauffenberg, one of the key plotters. The cast included Kenneth Branagh, Bill Nighy, Eddie Izzard, Terence Stamp and Tom Wilkinson. ... more on Wikipedia

Valkyrie is ranked on...

#77 of 374 The 50+ Best War Movies Ever Made, Ranked 520.6k VOTES From classics like Saving Private Ryan to newer entries like Dunkirk and 1917, this list ranks the best movies about war, ba...
#8 of 17 Pretty Good World War II Movies 14.9k VOTES WWII has been mined so aggressively by filmmakers you'd expect the mine to have collapsed and been deemed unsafe f...
#52 of 221 The Greatest World War II Movies of All Time 372.9k VOTES The best World War 2 movies remind us that perhaps no single event has had a greater impact on the future of filmmaking than...
#23 of 42 The All-Time Best Tom Cruise Movies 25.2k VOTES The best all-time Tom Cruise movies show the iconic drama and action-movie star in his finest performances. Cruise is easily...
#12 of 33 The Greatest World War II Dramas 678 VOTES Set during a time of global unrest, the best World War II movies deal with life-or-death scenarios at every turn. The top Wo...
#13 of 126 The Best PG-13 War Movies 2.6k VOTES List of PG-13 war movies, ranked from best to worst with movie trailers when available. Looking for a war movie to stream ri...
#11 of 43 The Best 2000s War Movies 2k VOTES What are the best '00s war movies? The decade has examples from ancient history (300, Troy) as well as depictions of more ...
The Most Accurate Movies About WWII 15.1k VIEWS Hollywood was making World War 2 movies well before the conflict was even over. That's how fascinating and important the sub...
#30 of 98 The Greatest Army Movies Ever Made 95.2k VOTES Feeling patriotic? Check out this list of best army movies, with videos, ranked by fans of army films. All of the top army m...
#19 of 55 The Best Bill Nighy Movies 1k VOTES List of the best Bill Nighy movies, ranked best to worst with movie trailers when available. Bill Nighy's highest grossing m...
#91 of 226 The Best PG-13 Thriller Movies 4.8k VOTES List of PG-13 thriller movies, ranked from best to worst with movie trailers when available. This list takes the best PG-13 ...

Valkyrie is also found on...