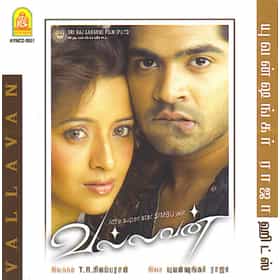 Vallavan is a 2006 Tamil film written and directed by Silambarasan, starring himself in the title role along with Nayantara, Reema Sen and Sandhya whilst Santhanam, Premji Amaren, Sathyan and S. Ve. Shekhar play supporting roles. The dialogues are written by Balakumaran.The film's score and soundtrack are composed by Yuvan Shankar Raja. The film, loosely based on Hollywood films The Notebook and Swimfan, was released on 13 October 2006 and turned out to be an Average despite having a good opening. The film was later dubbed into Telugu and released as Vallabha. ... more on Wikipedia

Vallavan is ranked on...

Vallavan is also found on...