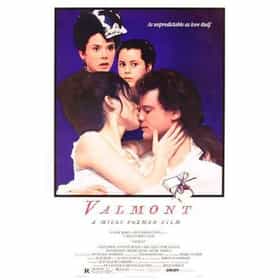 Valmont is a 1989 French-American drama film directed by Miloš Forman and starring Colin Firth, Annette Bening, and Meg Tilly. Based on the 1782 French novel Les Liaisons dangereuses by Choderlos de Laclos, and adapted for the screen by Jean-Claude Carrière, the film is about a scheming widow who bets her lover that he cannot corrupt a recently married honorable woman. During the process of seducing the married woman, he ends up falling in love with her. Valmont received an Academy Award nomination for Best Costume Design. ... more on Wikipedia

Valmont is ranked on...

Valmont is also found on...

Romance Movies and Films List of All Movies Released in 1989