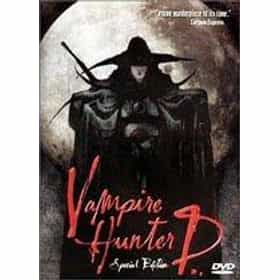 Vampire Hunter D is a 1985 Japanese horror/science fiction OVA film produced by Ashi Productions, in association with Epic/Sony Records, CBS Sony Group Inc. and Movic. The screenplay is based on the first in the long-running series of light novels written by Hideyuki Kikuchi. Billed by the Japanese producers as a "dark future science-fiction romance", the film, like the novel before it, is set in the year 12,090 AD, in a post-nuclear holocaust world where a young woman hires a mysterious half-vampire, half-human vampire hunter to protect her from a powerful vampire lord. ... more on Wikipedia

Vampire Hunter D is ranked on...

#489 of 598 The Best Animated Films Ever 970.6k VOTES The best animated movies of all time are an assortment of animated movies that rank among the best movies ever made. Wh...
#26 of 1,083 People who voted for Vampire Hunter D... also upvote Bleach on The Best Anime Series of All Time The Best Anime Movies of All Time 119.3k VOTES A list of all the best anime movies ever made, many of which are streaming on Netflix and Amazon Prime. This anime movie lis...
#21 of 46 The Best '80s Cartoon Movies 7.9k VOTES The 1980s brought a ton of explosive, bright, fun cartoon movies to the silver screen. Classics like The Little Mermaid and ...
#28 of 32 The Best Anime Like Kenichi: The Mightiest Disciple 1.6k VOTES Need some Kenichi: The Mightiest Disciple anime recommendations? Since it's such an influential series, let's rank...
#3 of 30 The Best Animated Movies for Horror Fans 620 VOTES Looking for animated horror movies? Then you've come to the right place. These are the scariest cartoon feature-length films...
#17 of 88 The Best Horror Movies of 1985 1.1k VOTES List of the best 1985 horror movies, ranked by how many upvotes they've received by other fans of the genre. All types of sc...