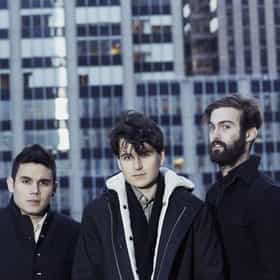 Vampire Weekend is an American rock band from New York City, formed in 2006. They are currently signed to XL Recordings. The band consists of lead vocalist and guitarist Ezra Koenig, guitarist/keyboardist and backing vocalist Rostam Batmanglij, drummer and percussionist Chris Tomson and bassist and backing vocalist Chris Baio. The band released its first album Vampire Weekend in 2008, which included the singles "Mansard Roof", "A-Punk", "Oxford Comma", "Cape Cod Kwassa Kwassa" and "The Kids Don't Stand a Chance". The band's second album, Contra, was released in 2010. Their third studio album, Modern Vampires of the City, was released on ... more on Wikipedia

Vampire Weekend is ranked on...

#12 of 561 People who voted for Vampire Weekend... People over 50 are 2x more likely to vote for this The Most Hipster Bands 178.9k VOTES Since the mid-2000s, the word hipster has invaded the lexicon of pop culture and has become a term, for better or worse, syn...
#302 of 1,038 The Worst Bands & Musicians of All Time 1.3M VOTES The worst bands in music history, ranked by music fans (and haters.) This list contains the most awful bands to listen to fr...
#25 of 42 The Best Bands Like The Killers 467 VOTES Looking for more bands like The Killers? Fronted by lead vocalist Brandon Flowers, The Killers have been a rock staple since...
#123 of 139 The Best Musical Guests on 'The Tonight Show Starring Jimmy Fallon' in 2019 1.6k VOTES Update - Check out the musical guests on Fallon in 2020! This list contains all the 2019 musical guests on Jimmy Fallon. R...
#5 of 75 The Best Musical Guests on 'The Late Show with Stephen Colbert' in 2019 1k VOTES Update - Check out the musical guests on Colbert in 2020! This list contains videos and information about the 2019 musical...
#26 of 230 The Very Best Indie Pop Bands & Artists 32.2k VOTES This indie pop bands list ranks the best indie pop groups and musicians making some of the best indie songs of 2018. This li...
#7 of 110 The Greatest Rock Artists Of The 2010s 1.7k VOTES Here are the best rock artists of the decade, ranked by fans everywhere. Featuring classic rock bands, talented singer-...
#403 of 676 The Best Alternative Bands/Artists 200.6k VOTES At the end of the 1980s, at the peak of glam rock and hair metal, a new genre began to emerge from the underground. Since it...
#25 of 81 The Best Post-punk Revival Bands 13k VOTES At the end of the 1990s and early 2000s after alternative music ran its course (or at minimum wasn't nearly as popular), the...
#40 of 115 The Best Musical Artists From New York 4.7k VOTES Here are the best artists and bands from New York. A mecca of great music, New York City has produced some of the most ...
Every Band & Musician Who Has Performed on Saturday Night Live 109.8k VIEWS Live from the main stage at 30 Rockefeller Plaza, this is a list of every band, musician, and singer who has performed on Sa...
#13 of 159 The Best Baroque Pop Bands/Artists 2.4k VOTES Baroque pop artists list, with photos, ranked best to worst by votes. List of good baroque pop bands includes a filter so yo...
#132 of 152 The Best Musicians Who Performed on SNL In The '00s 398 VOTES From the 9/11 attacks to the writers strike that shortened season 33 to some big cast shakeups mid-decade, Saturday Night Li...
#17 of 30 The Best Alternative Rock Bands Of 2020, Ranked 450 VOTES Whether you like infectious guitar riffs or wry lyrics, the best alternative rock bands of 2020 have it all. The 2020 class ...
20 Legendary Artists Who Overcame Critical Bashing 16.5k VIEWS They say hindsight is 20/20, and nowhere is this more apparent than in the world of music criticism. Time and again, greats ...
Coachella 2010 Review - Coachella Festival Rankings 13k VIEWS Overall, an excellent Cochella, though the huge crowds definitely added a bit more strain to the experience. Adding Coachell...

Vampire Weekend is also found on...