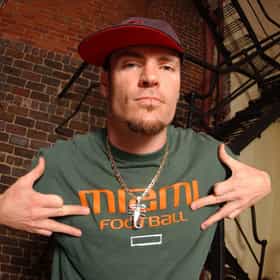 Robert Matthew Van Winkle (born October 31, 1967), known professionally as Vanilla Ice, is an American rapper, actor, and television host. Born in South Dallas, and raised in Texas and South Florida, Ice released his debut album, Hooked, in 1989 on Ichiban Records, before signing a contract with SBK Records, a record label of the EMI Group, which released a reformatted version of the album in 1990 under the title To the Extreme, which contained Ice's best-known hits: "Ice Ice Baby" and a cover of "Play That Funky Music". "Ice Ice Baby" was the first hip hop single to top the Billboard charts. Although he was successful, Ice later regretted his business ... more on Wikipedia

Vanilla Ice is ranked on...

Vanilla Ice is also found on...