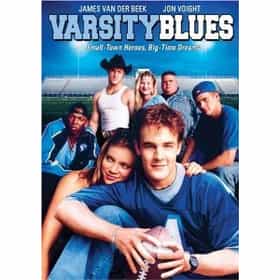 Varsity Blues is a 1999 American coming-of-age sports comedy-drama film directed by Brian Robbins that follows a small-town high school football team and their overbearing coach through a tumultuous season. The players must deal with the pressures of adolescence and their football-obsessed community while having their hard coach on their back constantly. In the small town of West Canaan, Texas, football is a way of life, and losing is not an option. Varsity Blues drew a domestic box office gross of $52 million against its estimated $16 million budget despite mixed critical reviews. ... more on Wikipedia

Varsity Blues is ranked on...

Varsity Blues is also found on...