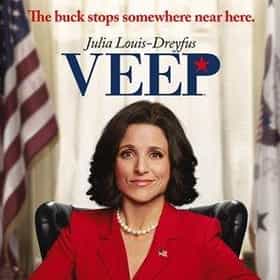 Veep is an HBO television comedy series, starring Julia Louis-Dreyfus, set in the office of Selina Meyer, a fictional Vice President, and subsequent President, of the United States. The series is a spin-off set in the same universe as The Thick of It also created by Armando Iannucci. He also created the Academy Award-nominated film In the Loop, which starred several Veep cast members alongside several Thick of It cast members. Veep premiered on HBO on April 22, 2012, with an eight-episode season. This was followed by a second season of ten episodes debuting on April 14, 2013. On May 1, 2013, HBO renewed Veep for a ten-episode third season that began on April 6, 2014. On April 21, 2014, ... more on Wikipedia

The Best Characters on HBO's Veep, Ranked 1.3k votes These are the best characters on HBO's Veep, ranked by viewers and fans. Ranked from best to worst, the list of Veep charact...
What to Watch If You Love 'Veep' 60 votes Veep is a political satire that garnered the love and affection of hordes of fans, but if you’ve finished watching the serie...
Ranking the Best Seasons of 'Veep' 112 votes This list features the best seasons of Veep, listed from best to worst with pictures of season posters when available. Fans ...

Veep is ranked on...

Veep is also found on...