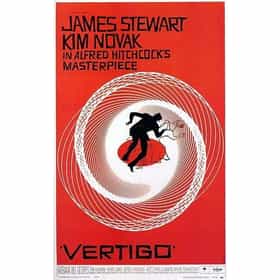 Vertigo is a 1958 American psychological thriller film directed and produced by Alfred Hitchcock. The story was based on the 1954 novel D'entre les morts by Boileau-Narcejac. The screenplay was written by Alec Coppel and Samuel A. Taylor. The film stars James Stewart as former police detective John "Scottie" Ferguson. Scottie is forced into early retirement because an incident in the line of duty has caused him to develop acrophobia and vertigo. Scottie is hired by an acquaintance, Gavin Elster, as a private investigator to follow Gavin's wife Madeleine, who is behaving strangely. The film was shot on location in San Francisco, California, and at Paramount Studios in ... more on Wikipedia

Vertigo Movie Quotes 106 votes Best Vertigo quotes, with movie clips, ranked by fans. This list of great movie quotes from Vertigo collects all of the most...

Vertigo is ranked on...

Vertigo is also found on...