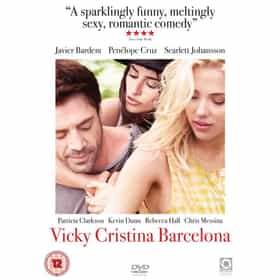 Vicky Cristina Barcelona is a 2008 romantic comedy-drama film written and directed by Woody Allen. The plot centers on two American women, Vicky and Cristina, who spend a summer in Barcelona where they meet an artist, Juan Antonio, who is attracted to both of them while still enamored of his mentally and emotionally unstable ex-wife María Elena. The film was shot in Spain in Barcelona, Avilés and Oviedo, and was Allen's fourth consecutive film shot outside of the United States. The film premiered at the 2008 Cannes Film Festival, then received a rolling worldwide general release that started on August 15, 2008, in the U.S., and continued in various countries until its ... more on Wikipedia

Vicky Cristina Barcelona is ranked on...