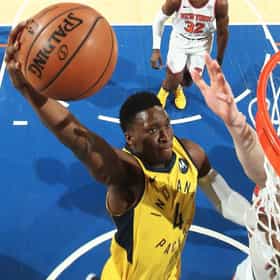 Kehinde Babatunde Victor Oladipo (born May 4, 1992) is an American professional basketball player for the Indiana Pacers of the National Basketball Association (NBA). Oladipo was drafted with the second overall pick in the 2013 NBA draft by the Orlando Magic and went on to be named to the NBA All-Rookie first team. He was traded to the Oklahoma City Thunder in 2016, and then traded to the Pacers in 2017. He became a first-time NBA All-Star, led the league in steals, was named to the All-Defensive First Team and the All-NBA Third Team, and won the NBA Most Improved Player Award in his first season with Indiana. Despite an injury-riddled 2018–19 season, including a season-ending injury ... more on Wikipedia

Victor Oladipo is ranked on...

Victor Oladipo is also found on...