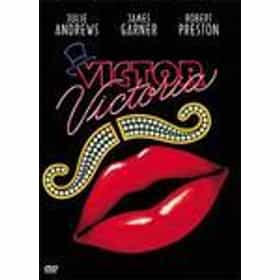 Victor Victoria is a 1982 film released by Metro-Goldwyn-Mayer and starring Julie Andrews, James Garner, Robert Preston, Lesley Ann Warren, Alex Karras, and John Rhys-Davies. The film was produced by Tony Adams, directed by Blake Edwards, and scored by Henry Mancini, with lyrics by Leslie Bricusse. It was adapted in 1995 as a Broadway musical. The film was nominated for seven Academy Awards and won the Academy Award for Original Music Score. It is a remake of the 1933 German film Viktor und Viktoria. ... more on Wikipedia

Victor Victoria is ranked on...

Victor Victoria is also found on...