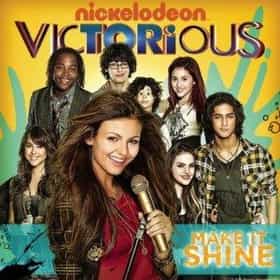 Victorious is an American sitcom created by Dan Schneider that originally aired on Nickelodeon from March 27, 2010 through February 2, 2013. The series revolves around aspiring singer Tori Vega, a teenager who attends a performing arts high school called Hollywood Arts High School, after taking her older sister Trina's place in a showcase while getting into screwball situations on a daily basis. On her first day at Hollywood Arts, she meets Andre Harris, Robbie Shapiro, Rex Powers, Jade West, Cat Valentine, and Beck Oliver. The series premiered on March 27, 2010 after the 2010 Kids' Choice Awards. The first soundtrack for the series, Victorious, was released on August 2, 2011. The ... more on Wikipedia

Victorious is ranked on...

#502 of 529 Things That Are Not As Cool As People Think They Are 1.2M VOTES Jorts are the dumbest things I've ever seen. Next to Toms shoes. Next to the Toyota Prius. Next to d-bags taking pictures of...
#238 of 296 The Greatest Sitcoms in Television History 959.9k VOTES Best sitcoms ever to air on television includes some of the greatest sitcoms of all time as ranked by fans of TV. What's the...
#436 of 590 The Best TV Theme Songs of All Time 323.7k VOTES The best TV theme songs and TV intros of all time will take you back to some of the greatest moments in TV. Television theme...
#86 of 145 The Most Annoying Kids Shows of All Time 84.5k VOTES There's something about TV shows made for children that can really put the rest of the world on edge. The loudness, the obno...
#46 of 123 TV Shows with the Hottest Casts 183.8k VOTES List of TV shows with the hottest casts. This list of the sexiest ensembles on television includes popular primetime dramas ...
#133 of 238 The Best Cartoons to Watch Stoned 64.9k VOTES Do you often wonder, “what are the best shows to watch high?” Or, more specifically, “what are the best cartoons to watch hi...
#90 of 129 People who voted for Victorious... People under 30 are 2x more likely to vote for this also upvote Back to the Future Franchise on The Best Teen Movies of All Time The Best High School TV Shows 135.8k VOTES The best high school TV shows include fantastic dramas that highlight the ups and downs of teenagers. In some cases, these s...
#68 of 101 The Funniest Shows Streaming on Netflix 49.9k VOTES The absolute funniest shows streaming on Netflix, ranked from the most popular to the least by the Ranker community. This li...
#13 of 61 The Best Teen Shows On Netflix 32.8k VOTES Here are the best teen shows streaming now on Netflix. Whether you're looking for classic sitcoms or more serious ...
#94 of 110 The Best TV Shows Set In L.A. 2.2k VOTES Los Angeles, California is not only where most television series are filmed, but it also tends to be where they're set as we...
#2 of 46 The Best 2010s Nickelodeon Shows 28.6k VOTES These are the best 2010s Nickelodeon shows, ranked from best to worst by user votes. Some top 2010s Nickelodeon shows were N...
#5 of 38 The Best TeenNick TV Shows 25.8k VOTES List of popular TeenNick shows, ranked from best to worst. This list of the top current and cancelled TeenNick TV series inc...
#7 of 63 The Funniest Kids Shows Ever Made 4.1k VOTES Kids love to laugh. While their parents may try to get them to watch educational programming, kids just want to change the c...
#27 of 38 The Best Family-Friendly Musical TV Shows, Ranked 1.7k VOTES Family musical TV shows promote learning, singing, and having fun with your loved ones. The best kids musical shows feature ...
#2 of 30 Good TV Shows for 8 Year Olds 445 VOTES Figuring out the best TV shows for 8-year-olds to watch can be complicated. Right at the cusp of being a tween, they know wh...