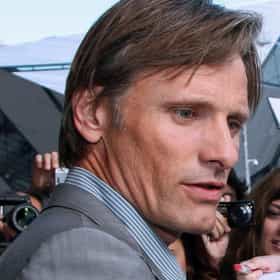 Viggo Peter Mortensen Jr. (; Danish: [viːko ˈmɒːtn̩sn̩]; born October 20, 1958) is a Danish-American actor, author, musician, photographer, poet, and painter. Born in New York to a Danish father and American mother, he was a resident of Venezuela and Argentina during his childhood. He is the recipient of various accolades including a Screen Actors Guild Award and has been nominated for three Academy Awards, three BAFTA Awards, and four Golden Globe Awards. Mortensen made his film debut in a small role in Peter Weir's 1985 thriller Witness starring Harrison Ford and has appeared in several notable films since, including The Indian Runner (1991), Carlito's Way (1993), Crimson Tide ... more on Wikipedia

Viggo Mortensen is ranked on...

#33 of 194 People who voted for Viggo Mortensen... Women are 2x more likely to vote for this The Hottest Men Over 40 1.1M VOTES The hottest men in Hollywood? Turns out, the older they get, the more we like them! Like fine wines, tweens, and your favori...
#129 of 1,151 People who voted for Viggo Mortensen... also upvote Lord of the Rings Franchise on The Best Movies of All Time The Best Actors in Film History 2.2M VOTES The best actors ever are ranked here in this list of the best actors in film history. These are the greatest actors ever to ...
#31 of 336 The Coolest Actors Ever 738.5k VOTES As movie fans, we like to think of our favorite actors as being larger than life. With all of the coverage that these stars ...
#37 of 333 The Greatest Actors Who Have Never Won an Oscar (for Acting) 453.2k VOTES There are many actors who haven't won an Oscar. For 95 percent of the acting population, there is probably a good reason the...
#22 of 115 The Greatest Film Actors Of The 2010s 30k VOTES Who were the best actors of the 2010s? This list will highlight 2010s actors, from Oscar regulars like Bradley Cooper and Ch...
#34 of 91 The Hottest Silver Foxes 71.8k VOTES Silver foxes are among the sexiest older men on the planet. A bit of gray streaked into a full head of hair on a man with we...
#28 of 179 The Best Living American Actors 265.8k VOTES It takes a lot to make a movie great. There has to be excellent writing, production, direction, editing, and of course, acti...
#126 of 431 The Hottest Male Celebrities 3.4M VOTES You love your boyfriend (husband? Lucky you!), but then there are these hot celebrity men. You see them and then you maybe f...
#22 of 53 Actors Who Almost Got the Part in a Marvel Film 54.2k VOTES Casting is truly an art form. Each and every cast member from starring, to supporting, to day-player affects the entire tone...
#20 of 116 Actors Who Consistently Make Great Movies 59.4k VOTES Most working stars in the film industry are just going from paycheck to paycheck; taking any job just to earn a living. Rega...
#31 of 255 Actors You Would Watch Read the Phone Book 316.1k VOTES List of actors who you would watch do something as mundane as read the phone book. Some of these guys are leading men, consi...
#21 of 81 Celebrities You Think Are The Most Humble 55.7k VOTES Humble: to have or show a low estimate of one's own importance. Humility is a rare virtue, particularly in a socia...
#9 of 15 Actors Who Were The Second Choice For The Famous Character They Played 9.2k VOTES Sometimes, history is made up of close calls and near misses, and film history is no different. The list of best movie chara...
#10 of 17 The Most Surprisingly Bilingual Celebrities 10.8k VOTES Actors are known for being skilled at languages, using their talents to tell universal stories. But while many of the most r...
#8 of 33 The Greatest Modern Day Renaissance Men 4.6k VOTES There's an easy way to become a renaissance man: become really good at a lot of things. Okay, maybe it's not that easy. But ...
#19 of 30 People who voted for Viggo Mortensen... People on the West Coast are 2x more likely to vote for this 30 Amazing Actors Who Could Play Cable 56.3k VOTES Cable is the son of Cyclops and Jean Grey (well... Jean Grey's clone, but we won't get into that) and is of the X-Men who ...
#2 of 10 2019 Golden Globe Best Film Actor Nominees 155 VOTES It's awards season and the nominations for the 2019 Golden Globe best film actor are in so you can make your predictions on ...
Cute Babies Who Grew Up to Be Movie Stars 1M VIEWS List of cute babies who would one day grow up to be movie stars. Although some may believe that all babies are beautiful, we...
80+ Famous People of English Descent 13k VIEWS This list of famous people of English descent is loosely ranked by fame and popularity. Many famous people are of English de...
53 Celebrities Who Own Horses 450.1k VIEWS Several famous actors, musicians, and athletes own horses. Some celebrities own large ranches where they are free to ride, w...
Celebrities You Didn't Know Are Bilingual 52.8k VIEWS This list of celebrities who are bilingual is loosely ranked by fame and popularity. Several famous actors, musicians, and a...
20 Actors Who Actually Do Their Own Stunts 52.3k VIEWS This list runs through famous actors who do their own stunts, loosely ranked by fame and popularity. Actors and actresses ha...
Relatives Of Celebrities Describe How They Reacted To Their Fame 1.3M VIEWS Celebrities aren’t just born out of the ether and sent into the public eye. They come from families filled with sibling...
The Hottest Celebrity Lumbersexuals 119.4k VIEWS First, there was the metrosexual. Then, the ubersexual. And now? The lumbersexual: a burly breed of man that is more into lo...

Viggo Mortensen is also found on...