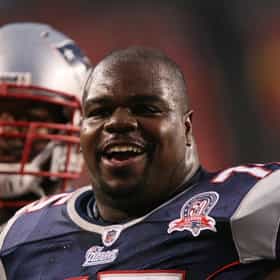 Vincent Lamar Wilfork (born November 4, 1981) is a former American football nose tackle who played in the National Football League (NFL) for 13 seasons. He played college football for the University of Miami and was drafted by the New England Patriots in the first round of the 2004 NFL Draft, and spent the first 11 years of his career there. By the late 2000s, Wilfork was considered to be one of the premier defensive tackles in the NFL, and was named both to the Pro Bowl and the All-Pro team in 2007, 2010, 2011, and 2012. He also played two seasons for the Houston Texans before retiring following the 2016 season. ... more on Wikipedia

Vince Wilfork is ranked on...

#104 of 508 The Greatest Defenders in NFL History 135.4k VOTES This list of the greatest defenders in NFL history is here to decide definitively who is the best defender in NFL history. T...
#165 of 1,556 The Best Football Players Ever 1M VOTES One of the hot topics of debate not only among NFL fans but pundits as well is who is the best football player of all time. ...
#8 of 95 The Greatest Out of Shape Athletes in Sports 14.4k VOTES The greatest out-of-shape athletes don't fit the mold of the typical athlete with toned limbs and six-pack abs yet they cont...
#19 of 53 The Best NFL Players From Florida 1k VOTES Here are the best NFL players from Florida! The list features all-time record holders, Hall of Famers, All-Pros, and elite t...
Famous People Named Vince & Vinny 21.1k VIEWS If your name is Vincent, then you're in some great company. Here's our list of the most famous people named Vince or Vinny, ...

Vince Wilfork is also found on...