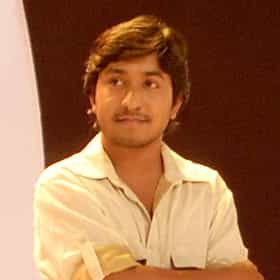 Vineeth Sreenivasan (born 1 October 1985) is an Indian playback singer, actor, film director, screenwriter, producer, lyricist, and dubbing artist. He works in Malayalam cinema. Vineeth is son of the actor-screenwriter Sreenivasan. He made his film debut in 2003 singing the song "Kasavinte Thattamittu" from Kilichundan Mampazham, and later also worked in music albums. Vineeth made his acting debut in Cycle (2008), and since then he has acted in numerous films. His directorial debut was in 2010 with Malarvaadi Arts Club, also written by him. He scripted and directed the film Thira in 2013, which introduced his younger brother Dhyan Sreenivasan as an actor. Vineeth's second ... more on Wikipedia

Vineeth Sreenivasan is ranked on...

Vineeth Sreenivasan is also found on...