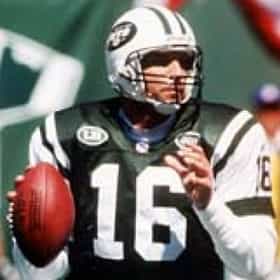 Vincent Frank Testaverde Sr. (; born November 13, 1963) is an American former football quarterback who played for 21 seasons in the National Football League (NFL). He played college football at Miami, where he was an All-American and won the Heisman Trophy in 1986. Testaverde was drafted by the Tampa Bay Buccaneers first overall in the 1987 NFL Draft. After leaving as a free agent, he signed with the Cleveland Browns and was among the personnel transferred to the newly created Baltimore Ravens during a controversial relocation of the team. He then joined the New York Jets, where he achieved his greatest success. In the last four seasons of his career, he played with the Dallas Cowboys, ... more on Wikipedia

Vinny Testaverde is ranked on...

Vinny Testaverde is also found on...