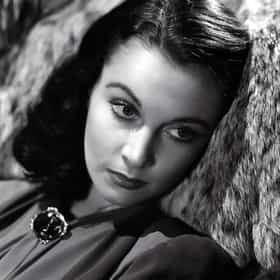 Vivien Leigh (; born Vivian Mary Hartley and styled as Lady Olivier after 1947; 5 November 1913 – 8 July 1967) was a British stage and film actress. She won two Academy Awards for Best Actress, for her definitive performances as Scarlett O'Hara in Gone with the Wind (1939) and Blanche DuBois in the film version of A Streetcar Named Desire (1951), a role she had also played on stage in London's West End in 1949. She also won a Tony Award for her work in the Broadway musical version of Tovarich (1963). After completing her drama school education, Leigh appeared in small roles in four films in 1935 and progressed to the role of heroine in Fire Over England (1937). Lauded for her beauty, ... more on Wikipedia

Vivien Leigh is ranked on...

#235 of 926 People who voted for Vivien Leigh... People in the South are 4x more likely to vote for this People We Wish Were Still Alive 3.3M VOTES RIP to our world's greatest achievers, those who changed the way we live and the ways we thought. This list of people we wis...
#12 of 3,310 The Most Beautiful Women of All Time 132.1M VOTES Here are the most beautiful women of all time ranked not on looks alone, regardless of their talent. Thi...
#356 of 470 Famous Women You'd Want to Have a Beer With 769k VOTES If given the opportunity to sit down for a beer with any famous female figure, which famous women would you most want to get...
#21 of 80 The Hottest Classic Actresses 82.6k VOTES A classic actress is usually defined as actresses from the "Studio Era" in Hollywood wherein a studio outright bou...
#4 of 76 The Best Actresses to Ever Win Oscars for Best Actress 71.2k VOTES Every year the Academy evaluates a year's worth of brilliant performances and picks what they believe to be the best of the ...
#30 of 2,003 People who voted for Vivien Leigh... People over 50 are 2x more likely to vote for this also upvote The Wizard of Oz on The Best Movies of All Time The Greatest Actors & Actresses in Entertainment History 1.7M VOTES The best actors and actresses of all time, male and female, ranked by film fans worldwide. This list of greatest actors and ...
#1 of 45 Resting Bitch Face: Who Does It Best? 17.5k VOTES Resting Bitch Face, or RBF, is a condition (or skill!) that delivers a very specific message. "I dare you to not disapp...
10 Awesome Old Hollywood Actresses Who Slept With Whoever They Felt Like 1.6M VIEWS The phrase "golden age of cinema" conjures up images of brooding leading men and glamorous Hollywood alp...
Famous People With Bipolar Disorder 1.4M VIEWS Bipolar disorder, also known as manic depression, is a mental illness that is classified as a mood disorder. People who suff...
The Locations of All Hollywood Walk of Fame Stars 418.7k VIEWS A list of stars on the Hollywood Walk of Fame, with photos. This list includes all television and movie stars. Acquiring a s...
Historical Figures Who Had Mental Illnesses or Crippling Phobias 73.8k VIEWS Mental illness through history often gets overwritten or overlooked ... largely because it makes certain people's stories le...
Cute Babies Who Grew Up to Be Movie Stars 1M VIEWS List of cute babies who would one day grow up to be movie stars. Although some may believe that all babies are beautiful, we...
22 Famous Actresses of the 1930s 134.9k VIEWS As a distraction from the stock market crash and the rise of the Great Depression, Americans began turning their attention t...
75+ Celebrities Who Are Cat People 377.8k VIEWS Cats. You love them or you hate them. However, several famous actors, comedians, and musicians are cat people. One famous ...
36 Famous Movie Stars of the 1940s 287.2k VIEWS These black and white photos of 1940s movie stars prove it: the '40s were great years for film. Famous 1940s actors, su...
26 Actors You Didn't Know Were in Musical Theatre 23.8k VIEWS Some film actors, like Julie Andrews and Nathan Lane are known for their musical theatre careers as well, but not the stars ...
35 Famous Movie Stars of the 1930s 114k VIEWS Lights, camera, action! These famous movie stars were the very definition of glitz and glamour in in the 1930s. Despite the ...

Vivien Leigh is also found on...