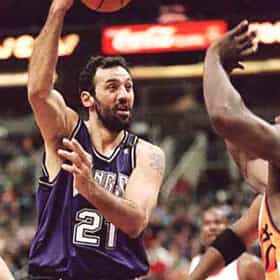 Vlade Divac (Serbian Cyrillic: Владе Дивац, pronounced [ʋlǎːde dǐːʋats]; born February 3, 1968) is a Serbian professional basketball executive and retired player, currently serving as the vice president of basketball operations and general manager of the Sacramento Kings.Divac spent most of his career in the National Basketball Association (NBA). At 7 ft 1 in (2.16 m), he played center and was known for his passing skills. He was among the first group of European basketball players to transfer to the NBA in the late 1980s and was named one of the 50 Greatest EuroLeague Contributors. He is one of seven players in NBA history to record 13,000 points, 9,000 rebounds, 3,000 assists, and ... more on Wikipedia

Vlade Divac is ranked on...

Vlade Divac is also found on...