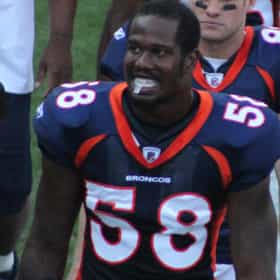 Vonnie B'Vsean Miller Jr. (born March 26, 1989) is an American football outside linebacker for the Denver Broncos of the National Football League (NFL). Miller played college football at Texas A&M, where he earned consensus All-American honors and was awarded the Butkus Award as the most outstanding college linebacker in the nation. He was drafted by the Broncos second overall in the 2011 NFL Draft. Considered among the best defenders in the league, he is a seven-time Pro Bowl selection, receiving first-team All-Pro honors as a rookie. At the conclusion of the 2015 NFL season, Miller was named Super Bowl MVP after the Broncos defeated the Carolina Panthers in Super Bowl 50. ... more on Wikipedia

Von Miller is ranked on...

#11 of 51 The Most Likable Active NFL Players 2.4k VOTES Are you ready for some (very nice) football! Even though football is a gritty game of tough competitors, the sport is filled...
#12 of 60 The Best NFL Players Of The 2010s 4.9k VOTES The best NFL players of the 2010s all dominated the sport in different ways. Offensive talents like Tom Brady, Aaron Rodgers...
#1 of 72 The Best Texas A&M Football Players of All Time 7.3k VOTES Hailing from College Station, Texas, where football is everything, the Aggies of Texas A&M are held to very high standar...
#17 of 155 People who voted for Von Miller... People in the Central US are 3x more likely to vote for this The Greatest Linebackers of All Time 140.3k VOTES The greatest linebackers of all time are not only the best NFL players to ever play the linebacker position but also some of...
#40 of 508 The Greatest Defenders in NFL History 135.4k VOTES This list of the greatest defenders in NFL history is here to decide definitively who is the best defender in NFL history. T...
#72 of 1,556 The Best Football Players Ever 1M VOTES One of the hot topics of debate not only among NFL fans but pundits as well is who is the best football player of all time. ...
#39 of 41 The 41 Hottest Men in the NFL 165.3k VOTES   The hottest current NFL players include some of the hottest athletes of all time that are currently playi...
#16 of 108 The Coolest Players in the NFL Right Now, Ranked 4.4k VOTES The coolest players in the NFL currently are not necessarily the biggest stars. Many of these players could be considered am...
#5 of 102 The Best Denver Broncos of All Time 53.9k VOTES This list ranks the best Denver Broncos of all time. The Denver Broncos are one of the charter members of the original AFL. ...
The 50 Highest-Paid Athletes 73.9k VIEWS   List of the highest paid athletes in the world, professional athletes who make the most money annually. This is For...
#1 of 60 The Best Denver Broncos Linebackers of All Time 3.5k VOTES Big fan of Denver football? Then check out this list of Denver Broncos linebackers with photos and seasons as starters.&nbsp...
#22 of 48 Who Will Win The 2019 NFL Defensive Player Of The Year? 5.7k VOTES The top NFL Defensive Player of the Year candidates in 2019 are all hoping to make a strong impact on their side of the...

Von Miller is also found on...