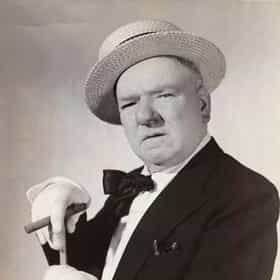 William Claude Dukenfield (January 29, 1880 – December 25, 1946), better known as W. C. Fields, was an American comedian, actor, juggler, and writer. Fields' comic persona was a misanthropic and hard-drinking egotist, who remained a sympathetic character despite his supposed contempt for children and dogs. His career in show business began in vaudeville, where he attained international success as a silent juggler. He gradually incorporated comedy into his act and was a featured comedian in the Ziegfeld Follies for several years. He became a star in the Broadway musical comedy Poppy (1923), in which he played a colorful small-time con man. His subsequent stage and film roles were often ... more on Wikipedia

#196 of 408 The Funniest Stand Up Comedians Of All Time 1M VOTES A ranked list of the best stand up comedians in the history of the art form. First and foremost, all of the people on this l...
#562 of 1,148 The Best Actors in Film History 2.2M VOTES The best actors ever are ranked here in this list of the best actors in film history. These are the greatest actors ever to ...
#154 of 255 Actors You Would Watch Read the Phone Book 318.2k VOTES List of actors who you would watch do something as mundane as read the phone book. Some of these guys are leading men, consi...
Celebrities You Didn't Know Use Stage Names 1.8M VIEWS List of celebrities with stage names, loosely ranked according to fame and popularity. It's tough to break into show busin...
The Locations of All Hollywood Walk of Fame Stars 419.2k VIEWS A list of stars on the Hollywood Walk of Fame, with photos. This list includes all television and movie stars. Acquiring a s...
Celebrities Who Died of Alcoholism 1.6M VIEWS This is a list of celebrities who died from their addiction to alcohol. While we may be more accustomed to celebrities dyi...
Famous Freemasons List 1M VIEWS List of Famous Freemasons ranked by fame and popularity. The Freemasons is a fraternal organization that has lodges all over...
Stars Who Passed on Iconic Hollywood Roles 206.8k VIEWS The most memorable characters of all time were almost played by stars other than the ones who famously brought them to life ...