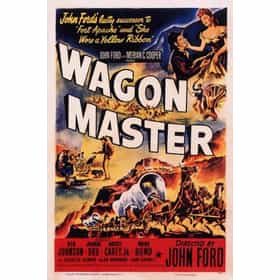 Wagon Master is a 1950 Western film about a Mormon pioneer wagon train to the San Juan River in Utah. The film was conceived, produced, and directed by John Ford, who is often listed among the greatest film directors. The film starred Ben Johnson, Harry Carey Jr., Joanne Dru, and Ward Bond. Wagon Master inspired the US television series Wagon Train, which starred Ward Bond until his death in 1960. The film was a personal favorite of Ford himself, who told Peter Bogdanovich in 1967 that "Along with The Fugitive and The Sun Shines Bright, Wagon Master came closest to being what I wanted to achieve." While the critical and audience response to Wagon Master was lukewarm on its ... more on Wikipedia

Wagon Master is ranked on...

Wagon Master is also found on...