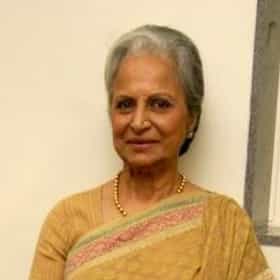 Waheeda Rehman (born 3 February 1938) is an Indian actress who has appeared in mainly Hindi films, as well as Telugu, Tamil, Bengali and Malayalam films. She is noted for her contributions to different genres of films and different roles from the 1950s, 1960s, and early 1970s. Her accolades consist of a National Film Award, two Filmfare Awards out of eight nominations, the Filmfare Lifetime Achievement Award and the Centenary Award for Indian Film Personality. Throughout her career, she has been frequently cited as one of Bollywood's "most beautiful" actresses by various media outlets, a title for which she has received substantial publicity.Although Rehman achieved her film ... more on Wikipedia

Waheeda Rehman is ranked on...

Waheeda Rehman is also found on...