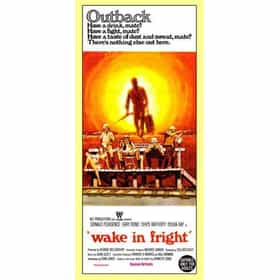 Wake in Fright is a 1971 Australian-American thriller film directed by Ted Kotcheff and starring Gary Bond, Donald Pleasence and Chips Rafferty. The screenplay was written by Evan Jones, based on Kenneth Cook's 1961 novel of the same name. Made on a budget of A$800,000, the film was an Australian/American co-production by NLT Productions and Group W. Wake in Fright tells the story of a young schoolteacher who descends into personal moral degradation after finding himself stranded in a brutal, menacing town in outback Australia. For many years, Wake in Fright enjoyed a reputation as Australia's great "lost film" because of its unavailability on VHS or DVD, as well as its ... more on Wikipedia

Wake in Fright is ranked on...

Wake in Fright is also found on...