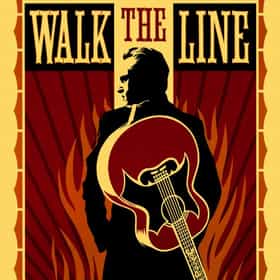 Walk the Line is a 2005 American biographical drama film directed by James Mangold and based on the early life and career of country music artist Johnny Cash. The film stars Joaquin Phoenix, Reese Witherspoon, Ginnifer Goodwin, and Robert Patrick. The film focuses on Cash's early life, his romance with June Carter, and his ascent to the country music scene, as based on his autobiographies. The screenplay was written by Mangold and Gill Dennis. The film's production budget is estimated to have been US$28 million. Walk the Line previewed at the Telluride Film Festival on September 4, 2005, and went into wide release on November 18. The film was nominated for five Oscars at the 78th ... more on Wikipedia

Walk the Line is ranked on...

Walk the Line is also found on...