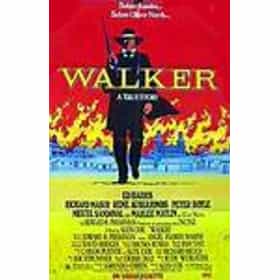 Walker is a 1987 American-Mexican Acid Western film directed by Alex Cox and starring Ed Harris, Richard Masur, Rene Auberjonois, Peter Boyle, Sy Richardson, Xander Berkeley, Alfonso Arau, Marlee Matlin and Miguel Sandoval. The film is based on the life story of William Walker, the American filibuster who invaded Mexico in the 1850s and made himself President of Nicaragua shortly thereafter. It was written by Rudy Wurlitzer and scored by Joe Strummer, who also plays a small role as a member of Walker's army. The film is intentionally full of anachronisms such as helicopters, Zippo lighters, automatic rifles and a car passing a horse carriage. It was filmed in Nicaragua during the ... more on Wikipedia

Walker is ranked on...

Walker is also found on...