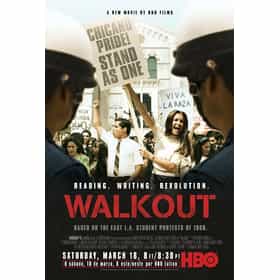 Walkout is a 2006 HBO film based on a true story of the 1968 East L.A. walkouts. It premiered March 18, 2006 on HBO. Starring Alexa Vega, Efren Ramirez and Michael Peña, the film was directed by Edward James Olmos. Moctezuma Esparza, one of the students who was involved in the walkouts, was the film's executive producer and many of the actors playing parents in the film were also protesters. A month after the film first aired, 2,500 Colorado students initiated a walkout of Denver schools to protest H.R. 4437, known as the "Sensenbrenner Bill." This House bill would have made it a felony to be in the US illegally. The bill was the catalyst for the 2006 U.S. immigration ... more on Wikipedia

Walkout is ranked on...

Walkout is also found on...