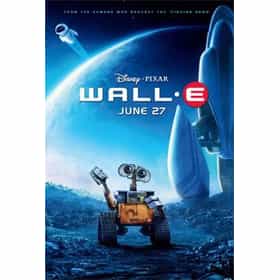 WALL-E is a 2008 American computer-animated science-fiction comedy film produced by Pixar Animation Studios and released by Walt Disney Pictures. Directed by Andrew Stanton, the story follows a robot named WALL-E, who is designed to clean up an abandoned, waste-covered Earth far in the future. He falls in love with another robot named EVE, who also has a programmed task, and follows her into outer space on an adventure that changes the destiny of both his kind and humanity. Both robots exhibit an appearance of free will and emotions similar to humans, which develop further as the film progresses. After directing Finding Nemo, Stanton felt Pixar had created believable simulations of ... more on Wikipedia

The Most Fascinating Facts You Didn't Know About WALL-E 168 votes For a movie with very few words, WALL-E certainly has a lot to say. With sly references, hidden biblical messages, and major...