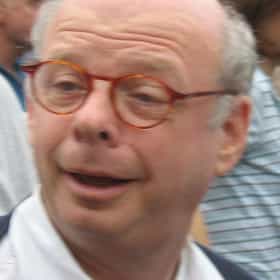 Wallace Michael Shawn (born November 12, 1943) is an American character actor, voice artist, playwright and essayist. His film roles have included those of Wally Shawn (a fictionalized version of himself) in the Louis Malle directed drama My Dinner with Andre (1981), John Lahr in Prick Up Your Ears (1987), Vizzini in The Princess Bride (1987), Mr. James Hall in Clueless (1995) and providing the voice of Rex in the Toy Story franchise. He also plays Dr. John Sturgis on the television series Young Sheldon. He has previously appeared in a variety of television series, including recurring roles as Grand Nagus Zek in Star Trek: Deep Space Nine, as Manny in the game Kings Quest (2016) and ... more on Wikipedia

Wallace Shawn is ranked on...

#297 of 346 The Greatest Entertainers of All Time 90.8k VOTES When it comes to the greatest entertainers of all time, we're truly blessed to live in an age where technology allows u...
#110 of 146 The Best Hallmark Channel Actors 145.1k VOTES They're the love interests, caring fathers, and grumpy neighbors. These Hallmark Channel actors add the romantic spark or em...
#90 of 150 The Best Animated Voiceover Performances 142.9k VOTES This list contains information about the best animated voiceover performances in film, ranked by your votes. Several famous ...
#7 of 27 The Best Actors And Actresses Whose Whole Thing Is Their Voice 14.4k VOTES More than a few of Hollywood's most renowned actors achieved fame, in part, because of their distinctive voices. James ...
#29 of 80 The Best Voiceover Performances in Film 11.4k VOTES This list contains information about the best voiceover performances in film, ranked by your votes. Several famous actors an...
The Smartest Celebrities 805.1k VIEWS The smartest celebrities are those who have documented high IQs, multiple degrees from distinguished universities, and a h...
Hallmark Channel Actors and Actresses 144.2k VIEWS The Hallmark Channel may have a primary group of talent they work with but they also employ a wide range of actors you will ...
Here's What Happened To Everyone From 'The Princess Bride' 74.5k VIEWS The Princes Bride was released in 1987, and yet decades later it remains one of the most beloved and most-quoted films ...
Famous Boarding School Alumni 38.7k VIEWS List of famous people who went to boarding school, loosely ranked by fame and popularity. For hundreds of years, rich and po...
#60 of 140 Dreamcasting Celebrities We Want To See On The Masked Singer 6.8k VOTES The US version of The Masked Singer has taken social media by storm and no wonder. With secret, costumed celebrities and clu...
300+ Famous People Who Went to Prep School 12.5k VIEWS Many of the most powerful people in the world went to prep school. The children of wealthy parents - often "old money&q...
Male Celebrities Who Are 5’2" 8k VIEWS This list contains examples of male celebs who are 5'2" loosely ranked by fame and popularity. Shorter than the average...
Famous People Named Wallace 2.5k VIEWS Ever thought about how many famous people named Wallace are out there? This list of celebrities named Wallace will show yo...
Actors in the Most Woody Allen Movies 15.4k VIEWS Woody Allen is one of the best directors of all time. He is known for making intelligent films from a New Yorker's perspecti...

Wallace Shawn is also found on...