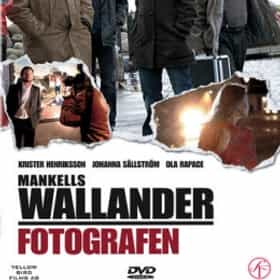 Wallander is a British television series adapted from the Swedish novelist Henning Mankell's Kurt Wallander novels and starring Kenneth Branagh as the eponymous police inspector. The first three-episode series, produced by Yellow Bird, Left Bank Pictures and TKBC for BBC Scotland, was broadcast on BBC One from November to December 2008. It is the first time the Wallander novels have been adapted into an English-language production. Yellow Bird, formed by Mankell, began negotiations with British companies to produce the adaptations in 2006. In 2007, Branagh met with Mankell to discuss playing the role. Contracts were signed and work began on the films, adapted from Sidetracked, Firewall ... more on Wikipedia

Wallander is ranked on...

#451 of 780 The Best TV Shows to Binge Watch 1.2M VOTES Bored? Not anymore! These are the best TV shows for binge-watching. The greatest television shows in the world are ranked he...
#757 of 2,286 The Greatest TV Shows Of All Time 1.4M VOTES Choosing the best TV shows of all time means taking into account the best TV dramas, the best TV comedies, the best cartoons...
#300 of 395 TV Shows That Only Smart People Appreciate 1.3M VOTES Since about the early 2000s, TV audiences have been blessed with what many experts call The Golden Age of Television. In oth...
#34 of 98 The Best British Detective Series, Ranked 310k VOTES This list of the best British detective series is ranked by British TV fans just like you! Who doesn't love a good detective...
#20 of 41 The Very Best British Crime Dramas, Ranked 7.5k VOTES British crime dramas are beloved around the world, thanks in part to the detectives who make sure the bad guys receive jus...
#59 of 123 The Best Serial Cop Dramas of All Time 37.2k VOTES The best serial cop dramas of all time include long-running police television shows that managed to combine elements of myst...
#25 of 40 What to Watch If You Love 'Sherlock' 795 VOTES Sherlock is a gripping action/mystery that garnered the love and affection of hordes of fans, but if you’ve finished watchin...
#119 of 166 The Best Mystery TV Shows 67.6k VOTES The best Mystery TV shows make trying to solve a great mystery exciting for both the fans and characters. Nothing beats the ...
#116 of 131 The Best TV Crime Dramas 34k VOTES The very best crime fiction shows on television, ranked from best to worst. This is a list of the greatest crime fiction sho...
#36 of 183 The Best BBC Television TV Shows 7.3k VOTES List of popular BBC Television shows, ranked from best to worst. This list of the top current and cancelled BBC Television T...
#27 of 44 The Best 2000s Crime Drama TV Shows 1.9k VOTES These are the best 2000s crime drama TV shows, ranked by user votes.  Some of these good 2000s crime drama series are a...
#36 of 61 The Very Best Mystery Shows & Movies 715 VOTES There's something about good mystery movies and television shows that keep you on the edge of your seat. Are ...