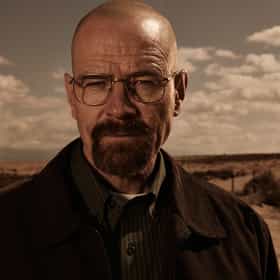 Walter Hartwell White is a fictional character. The main protagonist, and anti-hero, in the American television drama series Breaking Bad on AMC. He was created by series creator Vince Gilligan and is portrayed by Bryan Cranston. A graduate of the California Institute of Technology, Walt was once a promising chemist who was one of the founders of the multi-billion dollar company Gray Matter Technologies. He abruptly left the company, selling his shares for $5,000, and subsequently moved to Albuquerque, New Mexico to become a high school chemistry teacher. After being diagnosed with Stage IIIA lung cancer, he resorts to manufacturing methamphetamine and drug dealing to ensure his ... more on Wikipedia

The Most Low-Key Evil Things Walter White Ever Did 4.1k votes If it wasn't confirmed after five seasons of Breaking Bad, his brief cameo in El Camino definitely seals the deal - Walter W...

Walter White is ranked on...

#554 of 818 The Most Annoying TV and Film Characters Ever 1.5M VOTES You know them. You hate them. Honestly, who knows why these characters even exist. Did someone think they were funny? M...
#62 of 222 The Saddest Television Deaths Ever 1.7M VOTES Spoilers everywhere, of course! List of the saddest TV deaths as voted and ranked by fans. TV shows have long been able to p...
#39 of 39 The Most Satisfying TV Deaths Of All Time 62.3k VOTES Warning: spoilers and televised violence abound. TV deaths used to be sad affairs. Shows would promote them as “very speci...
#43 of 135 The Greatest Bad Boys in TV History 118.9k VOTES List of the greatest bad boys in TV history. Here is a listing of the cream of the crop when it comes to television's best b...
#68 of 96 People who voted for Walter White... People Age 30 to 49 are 2x more likely to vote for this Which TV Dad Do You Wish Was Your Own? 73.2k VOTES List of the greatest and most memorable dads from through television history. Which TV fathers were the most inspirational? ...
#50 of 123 The Creepiest Characters in TV History 83.3k VOTES The creepiest characters on television mess with our heads, leave us wondering and stick in our heads for a long time after ...
#1 of 44 The Most Well-Acted Characters of All Time 13k VOTES There’s such a huge different when discussing television characters versus film characters. The main distinction is that we ...
#10 of 20 The Villains Who Hurt Us The Most Over The 2010s 871 VOTES The 2010s might just have been the “Decade of the Villain.” That period of 10 years brought fans across multiple mediums and...
#45 of 77 The Biggest Pimps In Television History 37.8k VOTES The biggest pimps in television history are those lucky fictional characters who are notoriously promiscuous, making viewers...
#9 of 45 TV Husbands Whose Wives Should Have Divorced Them 16.6k VOTES List of TV husbands whose wives should have divorced them. This list includes the worst TV husbands of all types - from thos...
#11 of 18 Who We Thought Would Die in Breaking Bad's Final Season 1.1k VOTES Breaking Bad, one of the best shows currently on television, is about to end. No more blue meth, no more Badger, no more won...
#1 of 12 Supposedly Good TV Teachers Who Are Actually Horrible Educators 322 VOTES From Miss Brooks to Mr. Cooper, from 13 Reasons Why's Mrs. Bradley to Gilmore Girls's Mr. Medina, there is no shortage of go...
#5 of 100 Fictional Characters Named Walter 861 VOTES List of notable fictional characters whose name is Walter, including photos when available. The fictional characters named W...
Stories Behind Memorable Characters' Final Scenes On 'Breaking Bad' 62.2k VIEWS Over the course of five critically acclaimed seasons, AMC told the story of a high school chemistry teacher who is given a f...
What Your Favorite Fictional Characters Say About You, According To Science 73.5k VIEWS Everyone has their own favorite fictional character. Whether they are an unassuming hero or a psychopathic antagon...
#1 of 21 The Greatest Rebels In TV History 340 VOTES Get ready to stick it to authority as we rank the greatest rebels in TV history. Believe it or not, rebels have been on tele...
#1 of 45 The Best Bryan Cranston Characters of All Time 941 VOTES List of Bryan Cranston characters, ordered from best to worst along with movie trailers when available. These characters are...