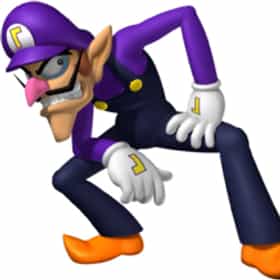 Waluigi is a fictional character in the Mario franchise. He plays the role of Luigi's rival and nemesis and accompanies Wario in spin-offs from the main Mario series, often for the sake of causing mischief. He was created by Camelot employee Fumihide Aoki and is voiced by Charles Martinet, who described Waluigi as someone who has a lot of self-pity and would "cheat to win." Waluigi debuted in the game Mario Tennis as Luigi's rival and Wario's partner. Since then, he would remain a playable character in the main Mario series spin-offs, occasionally causing comedic mischief alongside Wario or antagonizing the rest of the characters, primarily Mario and Luigi. Since his debut, ... more on Wikipedia

Waluigi is ranked on...

#189 of 258 The Most Hardcore Video Game Heroes of All Time 296.7k VOTES Who are the toughest and greatest video game characters ever? Not all videogame player characters are necessarily heroic, bu...
#1 of 82 Characters You Most Want To See In Super Smash Bros. Switch 56.7k VOTES With Super Smash Bros. officially announced for the Nintendo Switch, fans of the series wasted no time in predicti...
#35 of 156 The Best Video Game Villains of All Time 91.9k VOTES When it comes down to it, who is the best video game villain of all time? Video games typically a focus on the protagonist -...
#27 of 40 The Best Nintendo 64 Characters 4.1k VOTES While other game systems were moving to discs, Nintendo always found a way to zig when others sag, and the Nintendo 64 kept ...