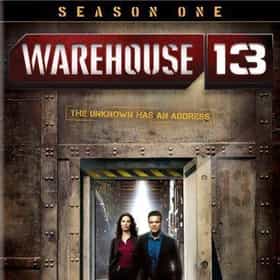 Warehouse 13 is a U.S. television science fiction series that premiered on July 7, 2009, on the Syfy network. Executive-produced by Jack Kenny and David Simkins, the dramatic comedy from Universal Media Studios is said to have borrowed much from the American-Canadian horror television series Friday the 13th: The Series, and has been described as "part The X-Files, part Raiders of the Lost Ark and part Moonlighting." The series premiere was Syfy's third largest debut to date, garnering 3.5 million viewers. The first six episodes were all among the top ten highest rated series episodes on Syfy. Episode 6, "Burnout", drew 4.4 million viewers, setting the record for ... more on Wikipedia

#164 of 779 People who voted for Warehouse 13... also upvote Robert Downey Jr. on The Best Actors Working Today also upvote Patrick Stewart on The Best Actors Working Today The Best TV Shows to Binge Watch 1.2M VOTES Bored? Not anymore! These are the best TV shows for binge-watching. The greatest television shows in the world are ranked he...
#24 of 310 People who voted for Warehouse 13... also upvote Harry Potter Franchise on The Best Movies of All Time The Best Sci Fi Television Series of All Time 938.3k VOTES Here is a list of the best sci-fi shows and best sci-fi series of all time, as ranked by hundreds of Ranker voters. Thi...
#131 of 396 TV Shows That Only Smart People Appreciate 1.3M VOTES Since about the early 2000s, TV audiences have been blessed with what many experts call The Golden Age of Television. In oth...
#141 of 413 The Best TV Shows to Rewatch 131.7k VOTES List of the best TV shows to rewatch, as ranked by television fans and critics. When the weekend comes around and you can’t ...
#1 of 20 The Most Underrated Sci-Fi TV Shows Of The 2010s 2.5k VOTES There was certainly no lack of television content in the 2010s. With the introduction of Netflix, Hulu, Disney Plus, and eve...
#16 of 45 What to Watch If You Love 'Doctor Who' 933 VOTES Doctor Who is not just a television show, it's an institution. With more than 50 years of amazing episodes, the Doctor ...
#70 of 128 Canceled Shows We'd Most Like to See as Movies 204.9k VOTES This list of canceled shows we'd like to see as movies includes a lot of huge cult favorites. Obviously this list isn't comp...
#17 of 38 The Best Sci-Fi & Fantasy Shows of 2013 19.8k VOTES Science fiction television has thrived for decades. It’s partially due to the dedicated fans that create websites, go to con...
#11 of 41 What to Watch If You Love 'Z Nation' 95 VOTES Z Nation kept viewers on the edge of their seats as survivors searched for a cure to the zombie apocalypse, so it's no surpr...
#6 of 28 The Best Supernatural Comedy Series 666 VOTES Many comedies on TV draw humor from relatable, everyday situations. However, there are shows that find the humor in the supe...
#46 of 151 The Best Action-Adventure TV Shows 39.7k VOTES The very best action/adventure shows on television, ranked from best to worst. This list of the greatest in your face explos...
#23 of 75 The Most Exciting Sci-Fi Series Ever Made 3.1k VOTES The top sci-fi TV shows ever aired are some of the most exciting and thought-provoking to watch on television, but which is ...
#12 of 68 The Best Syfy TV Shows 41.3k VOTES Do you believe in aliens, ghosts, and the supernatural? Then the Syfy channel is for you! This list of the top current and c...
#30 of 273 People who voted for Warehouse 13... People over 50 are 2x more likely to vote for this The Greatest Supernatural Shows of All Time 456.3k VOTES The very best supernatural shows on television, ranked from best to worst. Popular supernatural TV shows have been a staple ...
#19 of 49 The Best Procedural Dramas of All Time 713 VOTES Procedural dramas can get your adrenaline pumping and keep you hooked from the get go, but which procedural dramas are the b...
#8 of 46 The Greatest Sci-Fi Shows of The 2010s 15k VOTES These are the best 2010s sci-i shows, ranked from best to worst by user votes. There are good 2010s science fiction series t...
#15 of 37 The Best 2000s Sci-Fi Shows 4.7k VOTES These are the best 2000s Sci Fi shows, ranked from best to worst by user votes. Some good 2000s sci-fi series were set centu...
#32 of 33 The Greatest TV Shows About Technology 930 VOTES The one thing that remains ubiquitous in all our lives is technology, and you might even say the same for shows about techno...
#8 of 19 The Best Steampunk TV Shows 390 VOTES Steampunk is a popular television genre that incorporates aesthetic designs from 19th century machinery. From Dr. Who t...