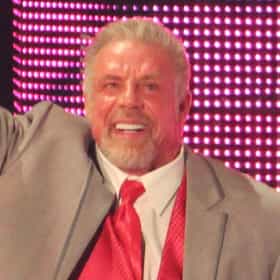 Warrior (born James Brian Hellwig; June 16, 1959 – April 8, 2014) was an American professional wrestler, who most famously wrestled under the ring name The Ultimate Warrior for the World Wrestling Federation (WWF, now WWE) from 1987 to 1991 and again in 1992 and 1996. During his 1998 stint in World Championship Wrestling (WCW), he was known as The Warrior. Before WWF, he was known in World Class Championship Wrestling (WCCW) as Dingo Warrior. While in the WWF, Warrior became a two-time WWF Intercontinental Heavyweight Champion and won the WWF World Heavyweight Championship once when he pinned Hulk Hogan in the main event at WrestleMania VI in Toronto, making him the first wrestler to ... more on Wikipedia

The Ultimate Warrior is ranked on...

#615 of 926 People We Wish Were Still Alive 3.3M VOTES RIP to our world's greatest achievers, those who changed the way we live and the ways we thought. This list of people we wis...
#20 of 211 People who voted for The Ultimate Warrior... People in the Midwest are 3x more likely to vote for this The Greatest WWE Superstars of All Time 232.7k VOTES List of the best WWE Superstars of all time. And for all you folks that were alive before 2002, this is a list of the best W...
#28 of 558 The Greatest Pro Wrestlers of All Time 1.1M VOTES The greatest pro wrestlers of all-time include WrestleMania winners, WWF and WWE champions, and TNA favorites. The entertain...
#6 of 86 The Best WWE Superstars of the '80s 85.3k VOTES The '80s. The "Golden Era" of wrestling. Why was it so great? Probably because of these WWE (then WWF) Superstars....
#13 of 177 The Most Overrated Wrestlers of All Time 188.1k VOTES Who are the most overrated wrestlers of all time? Obviously any list that includes words like "overrated" and &quo...
#4 of 15 The Best Face Paint in Wrestling History 6.6k VOTES Many historic battles featured tribes that would apply warpaint on their faces before heading into the fight. The purpose of...
#10 of 12 Hulk Hogan's Most Ridiculous Opponents 572 VOTES Of all the crazy wrestling characters in the history of sports entertainment, none is more famous than Hulk Hogan. During th...
#60 of 185 Celebrity Death Pool 2014 31.5k VOTES Celebrity death pool 2014: Here's a complete list of celebrities who just might die in 2014. Every year we lose more and mor...
#11 of 20 The Worst Pro-Wrestling Promos Ever Cut, Ranked 82 VOTES Also See: The Best Wrestling Promos Of All Time Wrestling demands much of its performers: grueling travel schedules, tough...
Professional Wrestlers Who Died Young 791.8k VIEWS Unlike any other athletes or sports entertainers, professional wrestlers are more prone to die before the age of 55. For wha...
Celebrities Who Died in 2014 2.2M VIEWS This list of celebrity deaths in 2014 is an official watch list of celebrities who died in 2014. Which famous celebrities di...

The Ultimate Warrior is also found on...