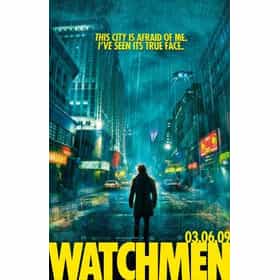 Watchmen is a 2009 American neo-noir superhero film directed by Zack Snyder and starring Malin Åkerman, Billy Crudup, Matthew Goode, Jackie Earle Haley, Jeffrey Dean Morgan, and Patrick Wilson. It is an adaptation of the 1986-87 DC Comics limited series of the same name by Alan Moore and Dave Gibbons. The film is set in an alternate history in the year 1985 and the conflict between the United States and the Soviet Union, as a group of mostly retired American superheroes investigates an apparent conspiracy against them and uncovers something even more grandiose and sinister, while their moral limitations are challenged by the complex nature of the circumstances. ... more on Wikipedia

300
We Finally Know What Happens After The End Of Watchmen, And It's Awesome 8.6k views The original 1986 release of Watchmen, written by Alan Moore and illustrated by Dave Gibbons, resulted in unparalleled prais...
Why Actual Graphic Novel Fans Hate The 'Watchmen' Movie 20.3k views Anytime a film version of a popular book diverges from its beloved source material, it's the alterations themselves that cau...
Background Heroes And Villains You Need To Know From The Watchmen Universe 2k views Alan Moore's dark, 1980s superhero story Watchmen follows a group of vigilantes struggling to find their purpose in an ever ...
Historical Events That Happen In The 'Watchmen' Universe 10.6k views Alan Moore and Dave Gibbons's Watchmen can be considered a fairly thorough guide to 20th-century history, using numerous rea...
Most Violent Moments In The 'Watchmen' Universe 1.7k votes A decade ago, Watchmen was a singular entity and it was easy enough to identify the most violent moments. Today, the Watchme...
Fan Theories About Watchmen That Make The Comic Way Better, Even If You've Read It 100 Times 835 votes Watchmen is one of the greatest comics of all time (though it's not for comic newbies). It's the creation of preeminent comi...
A Timeline Of The Many Attempts To Bring 'Watchmen' To The Screen 6.4k views The road from page to screen for Alan Moore and Dave Gibbons's Watchmen has been arduous and often disappointing for fans. W...

Watchmen is ranked on...

Watchmen is also found on...