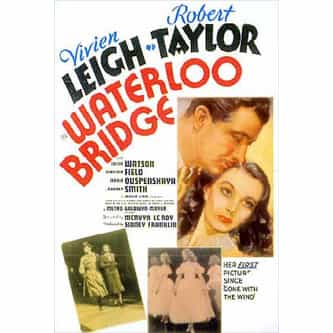 Waterloo Bridge is a 1940 remake of the 1931 American drama film also called Waterloo Bridge, adapted from the 1930 play Waterloo Bridge. In an extended flashback narration, it recounts the story of a dancer and an army captain who meet by chance on Waterloo Bridge. The film was made by Metro-Goldwyn-Mayer, directed by Mervyn LeRoy and produced by Sidney Franklin and Mervyn LeRoy. The screenplay is by S. N. Behrman, Hans Rameau and George Froeschel, based on the Broadway drama by Robert E. ... more on Wikipedia

Waterloo Bridge IS LISTED ON