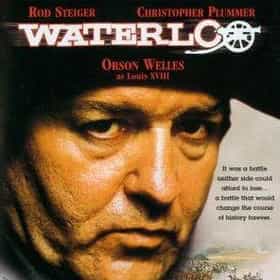 Waterloo is a 1970 Soviet-Italian film directed by Sergei Bondarchuk and produced by Dino De Laurentiis. It depicts the story of the preliminary events and the Battle of Waterloo, and is famous for its lavish battle scenes. It stars Rod Steiger as Napoleon Bonaparte and Christopher Plummer as the Duke of Wellington with a cameo by Orson Welles as Louis XVIII of France. Other stars include Jack Hawkins as General Thomas Picton, Virginia McKenna as the Duchess of Richmond and Dan O'Herlihy as Marshal Ney. The film includes some 15,000 Soviet foot soldiers and 2,000 cavalrymen as extras—it was said that, during its making, director Sergei Bondarchuk was in command of the seventh largest ... more on Wikipedia

Waterloo is ranked on...

Waterloo is also found on...