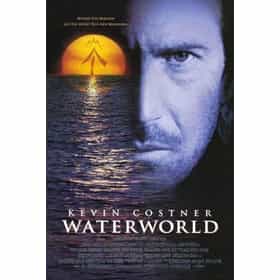 Waterworld is a 1995 American post-apocalyptic science fiction action film directed by Kevin Reynolds and co-written by Peter Rader and David Twohy. It was based on Rader's original 1986 screenplay and stars Kevin Costner, who also produced it with Charles Gordon and John Davis. It was distributed by Universal Pictures. The setting of the film is in the distant future. Although no exact date was given in the film itself, it has been suggested that it takes place in 2500. The polar ice caps have completely melted, and the sea level has risen many hundreds of feet, covering nearly all the land. The film illustrates this with an unusual variation on the Universal logo, which begins with ... more on Wikipedia

Not Only Was 'Waterworld' A Complete Flop, It Was An Utter Disaster During Production 142.2k views The 1995 science fiction epic Waterworld is considered one of the biggest flops of all time. But the film wasn’t simply a fl...

Waterworld is ranked on...

Waterworld is also found on...