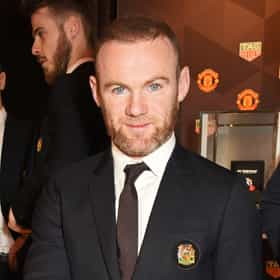 Wayne Mark Rooney (born 24 October 1985) is an English professional footballer who plays for American MLS club D.C. United. He has played much of his career as a forward, and he has also been used in various midfield roles. He is the record goalscorer for the England national team and for Manchester United. At club level, he has won every honour available in English, European, and Continental football, with the exception of the UEFA Super Cup. Rooney and Michael Carrick are the only English players to win the Premier League, FA Cup, UEFA Champions League, League Cup, UEFA Europa League, and FIFA Club World Cup.Rooney joined the Everton youth team at the age of 9 and made his ... more on Wikipedia

Wayne Rooney is ranked on...

Wayne Rooney is also found on...