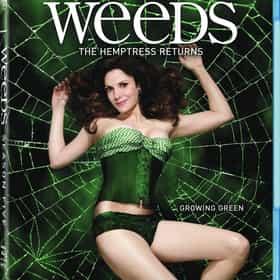 Weeds is an American dark comedy-drama series created by Jenji Kohan and produced by Tilted Productions in association with Lionsgate Television. The central character is Nancy Botwin, a widowed mother of two boys who begins selling to support her family after her husband passes suddenly of a heart attack. Over the course of the show, she and her family become increasingly entangled in badactivities. The first three seasons take place primarily in the fictional town of Agrestic, California. ... more on Wikipedia

Weeds is ranked on...

Weeds is also found on...