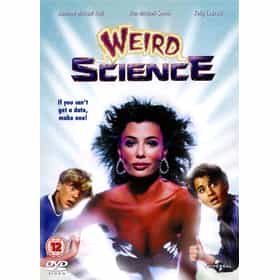 Weird Science is a 1985 American teen sci-fi comedy film written and directed by John Hughes and starring Anthony Michael Hall, Ilan Mitchell-Smith, and Kelly LeBrock. The film's producer, Joel Silver, acquired film rights to the pre-Comics Code Authority 1950s EC Comics magazine of the same name, from which the plot is developed as an expansion and modernization of the basic premise in Al Feldstein's story "Made of the Future" in the fifth issue. The title song was written and performed by American new wave band Oingo Boingo. As of 2013, a remake of Weird Science is currently in development at Universal Studios, with Joel Silver returning as producer and Michael Bacall also ... more on Wikipedia

Weird Science is ranked on...

#97 of 336 'Old' Movies Every Young Person Needs To Watch In Their Lifetime 1M VOTES If you're a younger millennial, you've probably heard your older friends and coworkers say things like "Hey, you g...
#229 of 1,699 The Most Rewatchable Movies 3.4M VOTES There are some movies that I always stop at and watch if I see them on TV or I can put in the DVD player and watch when I'm ...
#50 of 571 The Greatest Movies Of The 1980s, Ranked 524.7k VOTES Since it was one of the greatest decades for film, here's a list of the best movies of the 80s. These are the most popu...
#128 of 1,199 The Absolute Funniest Movies Of All Time 1M VOTES Looking for good comedy movies to watch? Here are the funniest movies of all time, ranked by fans. What are the top comedies...
#172 of 1,017 The All-Time Greatest Comedy Films 430k VOTES The best comedy movies of all time are listed here, in one convenient list to be voted on and ranked by true fans. Thes...
#115 of 266 The Best Ensemble Movies 17.3k VOTES The best ensemble movies feature an incredibly talented cast of actors and actresses, so much so that the cast overshadows e...
#33 of 624 People who voted for Weird Science... Men are 2x more likely to vote for this The Greatest Guilty Pleasure Movies 207.9k VOTES What makes a film a guilty pleasure? This is a movie that you love to watch, but won't display on your DVD shelf... or maybe...
#417 of 581 The Greatest Film Scores of All Time 231.7k VOTES This list contains greatest movie themes and scores ever recorded, chosen by the Ranker community. (NOTE: This list is for f...
#122 of 395 The Greatest Movie Themes 81.7k VOTES A memorable movie theme song is an underrated crucial element that helps turn a great movie into an iconic one. At its core,...
#6 of 14 The Most Ridiculous Movie Hacking Scenes, Ranked By Silliness 2.4k VOTES In real life, "hacking" is a technical pursuit that usually requires a boring, drawn-out, entirely unromantic slog...
#4 of 15 The Best Movies You Didnt Know Were Based on Comics 1.6k VOTES Comic book movies seem to be all the rage nowadays, with Captain American, Batman, Superman, The Avengers, and more all head...
#15 of 20 Movies That Should Be Remade 5.9k VOTES Movies that should be remade include movies that would benefit from a special effects facelift, films with outdated subject ...
#2 of 12 12 Most Memorable Movie And TV Romances Between Humans And Machines 416 VOTES Who can define love? Humankind has tried for thousands of years to understand just what love is but still can...
#26 of 55 Awesome Teen Movies You Must See Before You Turn 20 14.6k VOTES The films on this list of the best movies for teenagers have ranked by the community as the best teen movies in any genre. T...
#15 of 204 The Best Geek Movies 90.4k VOTES A list of the best geek movies. These are films featuring geeks, geek culture, or they're simply *for* geeks. If you believe...
#66 of 181 The Best PG-13 Teen Movies 104.1k VOTES While you often find the best humor, drama, or suspense in R-rated films, some of the best movies are those more geared towa...
#14 of 60 The Greatest Guilty Pleasure '80s Movies 10.6k VOTES Indulge your love of big hair, terrible fashion, and neon colors with this collection of guilty pleasure 80s movies. Wh...
#17 of 74 The Best Robert Downey Jr. Movies 23.2k VOTES List of the best Robert Downey Jr. movies, ranked best to worst by thousands of fans' votes. Long before he was Iron Man, Ro...
#35 of 95 The Best Teen Comedy Movies, Ranked 26.7k VOTES This list contains information on the best teen comedy movies, ranked from best to worst by user votes. The best teen comedy...
#11 of 34 The Best Romantic Comedies of the '80s 3.6k VOTES These are the very best 1980s romantic comedies, and even though all of these movies fall into the same genre, they are some...
#170 of 226 The Best PG-13 Fantasy Movies 4.8k VOTES List of PG-13 fantasy movies, ranked from best to worst with movie trailers when available. This list takes the best PG-13 f...
#29 of 55 The Very Best Geeky Shows & Movies, Ranked 1.7k VOTES Whether you are one or you know some, geeks are all around us. For years, the geek has been relegated to the dark and dank r...
#1 of 36 The Best Anthony Michael Hall Movies 714 VOTES List of the best Anthony Michael Hall movies, ranked best to worst with movie trailers when available. Anthony Michael Hall'...
#3 of 29 The Best Michael Berryman Movies 204 VOTES List of the best Michael Berryman movies, ranked best to worst with movie trailers when available. Michael Berryman's highes...
#8 of 70 The Best Movies Produced by Joel Silver 450 VOTES List of the best Joel Silver produced movies, with trailers of the films when available. All the top movies produced by Joel...
#1 of 10 The Best Kelly LeBrock Movies 167 VOTES List of the best Kelly LeBrock movies, ranked best to worst with movie trailers when available. Kelly LeBrock's highest gros...

Weird Science is also found on...